A document provided by “Boldnews.al” proves that the member of the Vetting Commission, Alma Vokopola (Faskaj) was dismissed from office by the High Council of Justice in 1996, for violating the law and incompetence.

This fact puts in great question the “filters” of Albanian institutions, as well as international missions, which were committed to selecting the “best lawyers”, for the process of re-evaluation of all judges and prosecutors.

A document signed by the Secretary General of the High Judicial Council, Rudin Baqli, reads: “Alma Vokopola (Faskaj), with decision no. 8, dt. 23.08.1996 of the High Council of Justice, has been dismissed for violation of law and incapacity for duty.

This fact, serious for a professional, seems to have been kept secret in the application that Ms. Faskaj submitted for her candidacy as a member of the Independent Qualification Commission.

The Vetting Act stipulates that persons who have been dismissed by a final decision cannot be elected commissioners.

The letter from the High Judicial Council does not mention any change, revocation or rejection of the decision to dismiss Ms. Feskaj. This means that the 1996 decision remains in force. 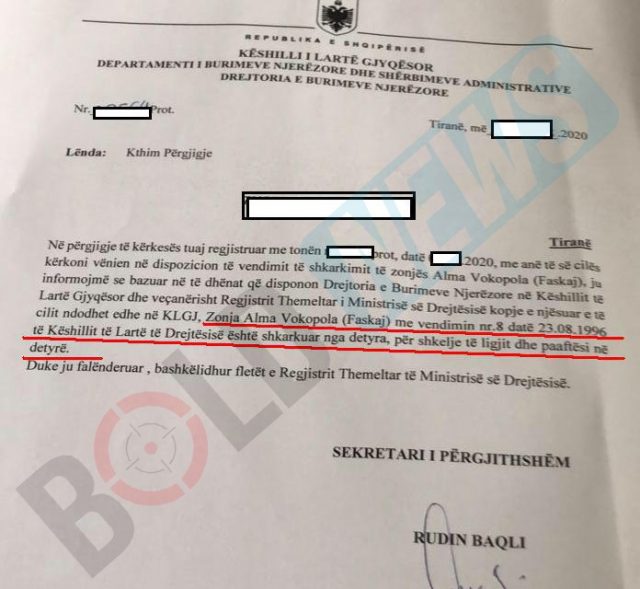 It is unclear how the verification of the professionalism of Mrs. Faskaj is made becouse in the state registers it turns out that she was fired for incompetence and violation of the law.

This fact calls into question her commitment to the process of re-evaluating judges and prosecutors.

The case of Commissioner Faskaj (Vokopola) is not the only one. Some time ago, “Boldnews.al” published a document, based on which it turned out that the member of the Special Appellate Panel, Luan Daci, was dismissed in 1997.

And yet, Daci is still in office, despite the disclosure of official documents.

Already, the Vetting Commissioner is in the same situation, questioning not only her professional skills, but also the integrity of the entire reassessment process.

Tragedy in the Albanian family in Zurich / The girl is arrested, she suspected that she killed her father

Tragedy in the Albanian family in Zurich / The girl is arrested, she suspected...

admin - September 26, 2020
The murder of a 47-year-old Albanian in Switzerland, according to initial reports, was an enigma. However, the public prosecutor's office now assumes that the...