President Vucic looms large in a new campaign designed to attract Chinese tourists to Serbia – one of Beijing’s closest allies in Europe – as Serbia’s tourist boss says they want to make sure China ‘does not forget about us’ during the pandemic.

Serbian President Aleksandar Vucic has become a direct part of a campaign to attract tourists from China, with his photo on posters inviting Chinese people to visit Serbia, as a part of broader campaign of promoting Serbia in the country.

Serbia’s embassy in China has published a promotional video marking the start of the campaign that includes posters of Vucic and Tourist Organisation of Serbia chief Marija Labovic inviting people to come to Serbia.

Due to the outbreak of COVID-19, borders have closed and tourist arrangements have stopped. However, tourist boss Labovic said they were launching the new campaign in China with a view to luring visitors once the pandemic is over.

Labovic said they wanted to make sure that people in China “do not forget about Serbia, that Serbia is in their focus even if they cannot travel at this moment; we want them to be there, we want them to keep an eye on us, so that when this crisis passes, we will be the first country of choice for their trip abroad,” Labovic said. 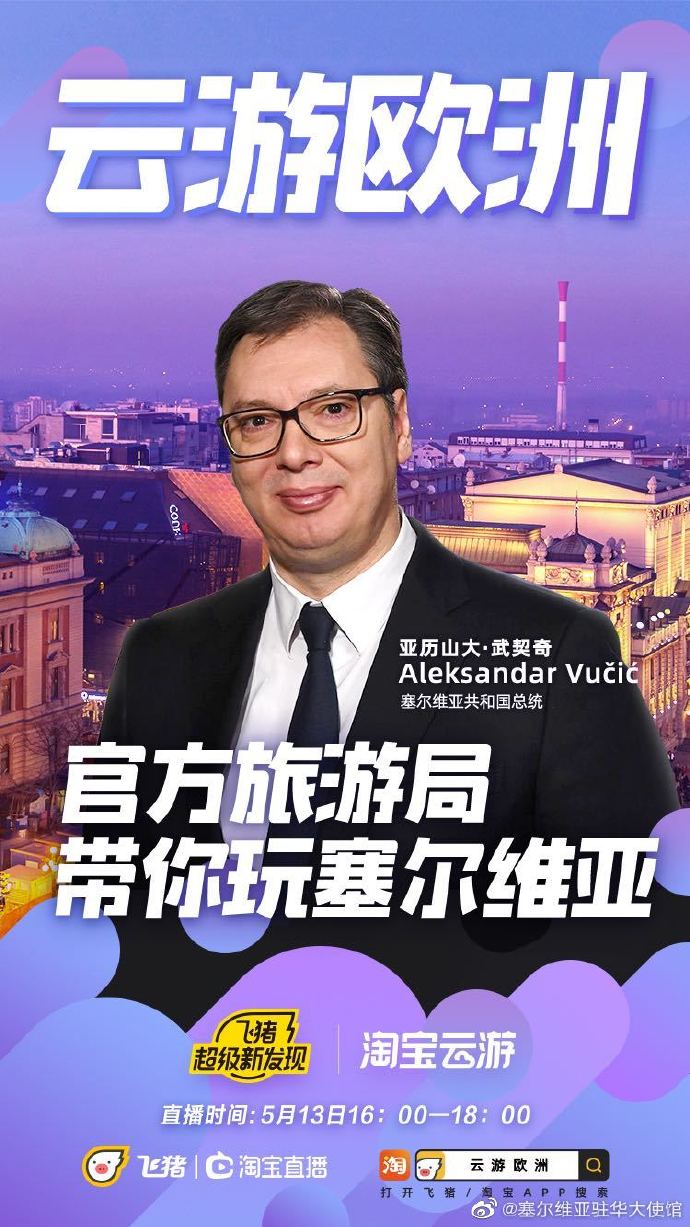 She added that President Vucic was “in some way a participant in the campaign” because he “enjoys great popularity in China”.

In September 2019, the Tourist Organisation of Serbia signed a contract with a Chinese company, Alibaba, to promote the Balkan country on all of Alibaba’s platforms and on social networks like WeChat and Weibo.

Tourism Minister Rasim Ljajic, who announced the signing of the contract at the China International Fair for Investment and Trade, said the contract meant active promotion of Serbia would start by November 30, 2019.

“On all Alibaba platforms, especially on Fliggy, but also on other Chinese platforms, such as WeChat and Weibo, we will present everything that Serbia can offer in terms of tourism,” Ljajic told the press.

Serbia is one of China’s closest allies in Europe, an increasingly controversial issue given the fast-growing tensions between Beijing and the US.

China has become increasingly present in Serbia meantime. Beside tourism ventures and joint patrols of Serbian and Chinese police, China has bought up numerous companies in Serbia, become a partner in major building projects and is also a supplier of surveillance equipment.

Since the start of COVID-19 pandemic, China has also been present as a valued and much praised partner in the “fight” against the disease. The Serbian President, when imposing state of emergency, notably prayed for Chinese help and declared that “European solidarity does not exist”.

Medical equipment and experts from China have also come to Belgrade, which Vucic welcomed, and their arrival was broadcasted live on the national public service.